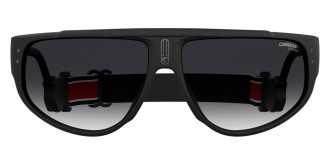 A modern standard of quality and style, a symbol of prestige and innovation, the Carrera brand appeared on the world stage in the mid-fifties. The story began with the Carrera Panamericana automobile race, held in 1950-1954. It was attended by the greatest racers in the world. The race took place on public roads and entailed enormous danger and increased mortality, which served as a strong reason for its closure. However, the name of the race was perfect for the new brand, which was founded in 1956 by the Austrian manufacturer of sports glasses Wilhelm Anger. The extraordinary bright defiant design, sports lines reminiscent of the thirst for speed and victory were immediately appreciated by professional athletes.

The superior quality, convenience, and practicality of the models have expanded the audience of fans and Carrera sunglasses have become a favorite accessory among celebrities and people who followed trends. With the beginning of the seventies, in addition to sports glasses, Carrera began to produce helmets for motorcyclists, masks for alpine skiing, sunglasses, and spectacle frames. Besides stunning Aviator sunglasses in various interpretations, the brand presents fashionable shield and wrap models, round and rectangular, created using the latest technical developments and innovative materials.